skip to main | skip to sidebar

CDSS IT'S MY LIFE - THE MUSICAL 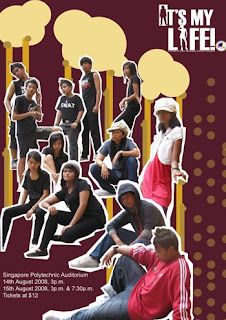 This post is going to be a unique one. Instead of the visual arts post, I would like to bring you to the performing arts scene. Last night, I went to Singapore Polytechnic Auditorium to watch Chestnut Drive Secondary School's production, entitled It's My Life. Set in local Singapore context, the musical explores the search of identity for youths, brotherly love and influence through the male protagonist, Ben. The main actors and actresses should be applauded as they could successfully relate to the characters in the play. They had made exceptional connections to the characters. The actors’ character depiction of best friends who shows brotherly concern through loyalty is remarkable. However, in the second act after the intermission, the other actors who played minor roles have unequal performance level compared to the main cast. Hence, they showed the salient disparity of the acting. Unfortunately, the male protagonist seemed to be just remembering his lines at the end of the musical through a monologue. He did not do justice to the lines themselves. In the end, what could have been a forceful conclusion turned out unsatisfyingly flat.
Of all the secondary schools musical that I have watched thus far, Chestnut Drive Secondary School is a school that have more talents that any others. First and foremost, the singers were in sync. Harmoniously, the voices of the singers are in fact better and of a more consistent quality than the acting and narrating in the musical. If I was not informed, I would have thought they are from the choir. Apparently, they are not from the choir, and that amazes me truly.
As for the dancers, even though they did not started too well with their energy level in the beginning of the musical, they picked it up so well gradually till to the point that the musical will not had been as interesting without their presence. I particularly like the part where the dancers were choreographed to enter the stage with their cameras to act as journalists. Another group that deserves to be given the special attention for the effort is the “Stomp” of the school. Without fail, they blew away the audiences not only with their stage presence but also their physical movements that go along effectively with the sound coming out from their musical instruments, which are tubs, bamboo sticks, garbage bins and wooden spoons. Indeed, one of the highlights of the show when the “Stomp” group did two performances unrelated to the musical after the musical.
While the various groups in the musical shines in the musical and visual aesthetics through dance movements and singing done harmoniously all contribute to the musical’s concerns in a subtle but engaging manner, it is unfortunate that the musical had to suffer from inconsistencies that hampered a fuller enjoyment of the musical.
Disappointingly, the technical aspects of the stage for the musical play a major part of the inconsistency, as they were not effectively utilized. The transition and the flow of the play were poor in terms of lightings. There were too many blackouts and spots were not effectively used in the play. Therefore, this make the links between the scenes, disjointed and made the whole musical incoherent, leaving one wondering what exactly happened before and after the scene. The directing plays another part too. The musical has good portrayal of characters but it lacks gesture to emote, to communicate and the intentions towards the development of the musical.
Although the musical is technically unsung and direction less than impressive, It’s My Life was still a unique and fascinating play, by turns humorous, well choreographed and looks challenging. For a first and greenness from the teachers of Chestnut Drive Secondary School, who has not even entered any Singapore Youth Festival for drama, this musical sincerely deserves an ovation.
Posted by erman, creative at 11:46 PM No comments: This is a relief sculpture class that me and Mdm Rafilah had with JVSS. We have the same objectives of creating a relief sculpture but have different approach. My approach places emphasis on a focal point in a composition, however hers is more towards the aesthetics in the creation of the sculpture itself. If you still can't figure out what I mean, you will get to see it soon enough. I have taken the best of the best works in both my class and her class. Presenting Secondary 2C (Mr Erman class) works & 2D (Mdm Rafilah class) works.
Secondary 2C This student has put a red mark to immediately make me see the focal point of her artwork. So smart of her. Furthermore, her basic shapes complements her focus. Some students brought it into another level by creating an architecture space for the relief sculpture. Just by using cardboards, the play of heights and arrangements are fantastic.

Secondary 2D
This is mentor's class. The aesthetic. The effort put in by her students'. The approach to create the kind of sculpture in her class. One word. WOW! Look at the spirals! Aren't they so beautiful? Looks at this remarkable work. The student uses different cardboard to differentiate the heights of the sculpture.
Awesome ain't it? The two classes. Different Teachers. Different Style. Different Approach. Same End. Yet, another impressive bunch.
Posted by erman, creative at 10:29 PM 3 comments:

My students from sec 3T2 were taught the principles of design mainly on emphasis and rhythm, through the infamous arrow drawing style! After that, their understanding of these principles are tested by asking them to create a composition based on the given haiku below.
Cacti in the desert
One standing tall
The rest feeling small
I'm glad that all of them could grasp the understanding through their drawings. Spot the emphasis in every drawing! We had a great time together, expressively painting the composition. Here are the works from my talented sec 3T2 students! (Works that are not finished are due to other school commitments that my students had to attend to.. and it's my last week in that school =(... )

Arkar & Asyraf
Posted by erman, creative at 11:12 PM No comments: Painting by Mr Erman A.B , 2008
Cacti in the desert
One standing tall
The rest feeling small
COMING SOON!
Paintings from talented students from JVSS, sec 3T2
Posted by erman, creative at 12:27 AM No comments:

Trained in Fine Arts, Erman is a graphic & multimedia artist and an educator. His works as a graphic designer is best known for events events such as the inaugural Martini Innercity Festival 2006, Asian Festival of 1st Films 2006 and the recent Out of the Box Festival of Puppet Theatre 2008. As a multimedia artist, he has developed games with Singapore- based mobile company www.fatpengy.com.

For theatres, he had wriggled a great amount of keyframes on multimedia works for theatre productions such as The Swing (2001), I’m Still Here (2003), Mama Looking for Her Cat (2005), Lao Jiu – A Living Legacy (2006) In addition, as a passionate educator, he had spend year 2007 to have students in various secondary schools under his tutelage for multimedia in theatres.

His latest multimedia project, in colloboration with a Singapore-based mobile community, www.fatpengy.com, has been selected on an international platform under UK’s mobile community in Playyoo.com. He is currently developing a new game that will be made available in end 2008 while also, continuing to educate students how to be visually creative.
Posted by erman, creative at 12:19 AM No comments:

Welcome back to school people! Today is the first day of school and I hope you all are gear up for the next half of the year! Because I am not.
I am a teacher in Jurongville Secondary School now. A whole new bunch of people I need to get to know. A whole new bunch of students looking at me in doubt to see such a teacher in their school. What can I say?
Smile! Welcome to Mr Arrow's Art Class.
Posted by erman, creative at 10:29 PM No comments:

Some background information on the previous school that I was in. I have taught for six month in that school and she was in my sec 1 class. Since I know I was going to be there for a very short time, my mode of teaching is not based on grasping certain art skills but more of creative thinking, which would definitely be remembered for a very long time.

This post will talk about one particular student whose artwork deserved to be commended. She's 14 years old this year. Despite having alot of subjects to study for the mid year. She gave her time to prepare for her Art. I knew she has not acquire much observational skills for drawing or knowing painting techniques. However, she's a deep and sentimental thinker. She never fails to make me be awed and inspired, myself, when she came out with this awesome and creative concept.

The topic that she has chosen is Natural Beauty. Her mindmap branches to words such as Natural that is further broken down to nature and Beauty. To assist herself, she wrote, "What is beautiful to you?" Just by looking at her mindmap, I know that she has a very interesting approach ot the topic. Take for example, she wrote down the shooting star as something natural and beautiful. But she did not stop at that, she further wrote down about meteorites, which is something not many people realise the beauty of shooting stars comes from an ugly rock. Through her mindmap, she has chosen sunflower, as the subject for nature and the idea of shooting star to depict beauty. Next picture is her sketches. I asked her to refere to Vincent Van Gogh and George O Keefe instantaneously when she told me bt sunflowers. But on shooting stars, that is something new. I asked her to explore compositional possibilites for that. And she dilligently did it. As you can see, she tried different possibilities in her composition ie. make the sunflower bigger as focus or draw lots more meteorites etc. And lastly, a picture of the colour scheme that she has used. Who can ever believe me if I tell them a 14 year old thought of this though provoking concept for her topic of Natural Beauty. Sunflower as the main subject of beauty complements with shooting stars to enhance or to make people realise that there's an ugly side to every beauty. To end of this post, something for you to ponder. Sunflowers are beautiful flowers to many but to farmers they are weeds that will grow uknowingly in their crops. P.S It would certainly be great if she can show me her final artpiece which she had done for her mid year soon. Good luck and Good job Mingfen. =)

All the photos in this entry had been taken by Mingfen, herself.

Posted by erman, creative at 12:31 PM No comments:

DO YOU HAVE ANY QUESTIONS?

View my page on Art Education 2.0

If you have an idea or question about anything you read in my blog, an art teacher or simply someone who cares about children, I am interested in your thoughts. I will respond to art teachers and parents who send me notes.